What research is there in homeopathy?

There is sound research and evidence in homeopathy.

For example; by the end of 2019, 221 randomised controlled trials of homeopathy on 115 different medical conditions had been published in peer-reviewed journals. Of these, 129 were placebo-controlled on 77 medical conditions and were therefore eligible for detailed review.

These results are surprisingly similar to the effectiveness of conventional medicine. A study printed in 2015 in the British Medical Journal (BMJ) found that of 3,000 commonly used NHS treatments 50% are of unknown effectiveness and only 11% are proven to be beneficial. See chart.11

SSRI anti-depressants, such as Prozac, are an example of such a treatment. These have now been confirmed as being no more effective than placebo in the treatment of mild and moderate depression, yet in 2016 the NHS dispensed 64.7 million anti-depressant items.12 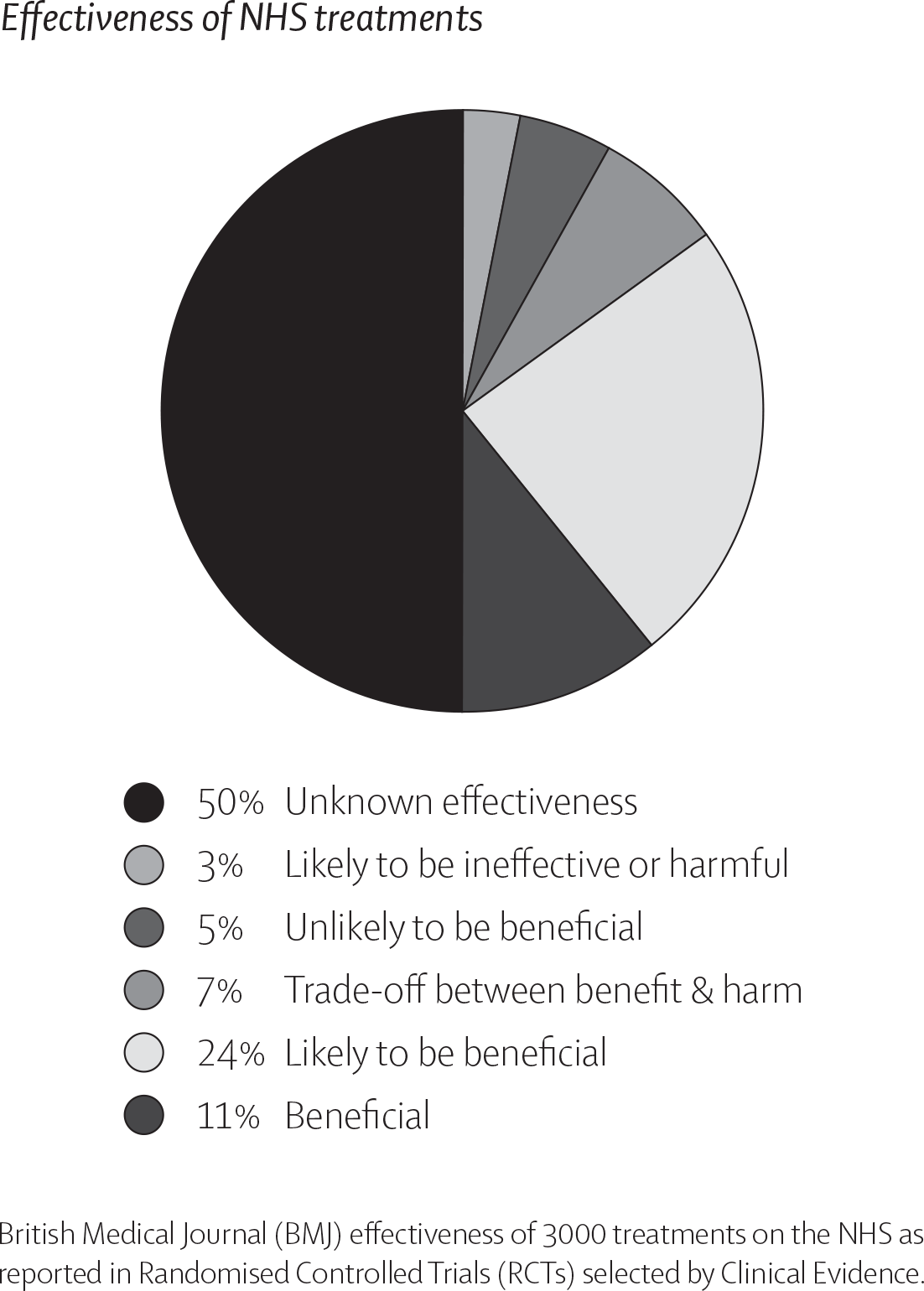 Several systematic reviews and meta-analyses of homeopathy (large scale overview of all previous research) have also been carried out. However, until 2014, none had looked solely at placebo-controlled trials of individualised homeopathic treatment, as is usually delivered by homeopaths in practice.

The research team led by Dr Mathie et al. has now performed such an analysis and found that homeopathic medicines when prescribed during individualised treatment are 1.5-2.0 times more likely to have a beneficial effect than placebo.13 As Dr Mathie explains, when taken collectively, this programme of work reaches an “unequivocally positive result” for homeopathy.

Yes. There is sound evidence of homeopathy’s effectiveness

What is Evidence-Based Practice?

In recent years there has been a trend for evidence-based medicine with the gold standard often cited as randomised controlled trials (RCTs). However, these have also attracted criticism because the pharmaceutical companies often only publish the positive results, only fund trials for the drugs that promise high financial returns and often misrepresent data.14

Randomised controlled trials are also problematic because they usually focus on one particular symptom and a very narrow mode of action. By its very nature, homeopathic treatment looks at the totality of symptoms; a homeopath will take into account not just the patient’s general symptoms, but also many other factors that may be affecting their life at that time. The resulting prescription is therefore highly individualised, meaning that different remedies may be given to different people, even if they have the same ailment. This approach is much harder to test with RCTs.

Evidence-based medicine used to be termed evidence-based practice. “Evidence-Based Practice (EBP) is the integration of clinical expertise, patient values, and the best research evidence into the decision-making process for patient care. Clinical expertise refers to the clinician’s accumulated experience, education and clinical skills. The patient brings to the encounter his or her own personal preferences and unique concerns, expectations, and values.

The best research evidence is usually found in clinically relevant research that has been conducted using sound methodology.”15

In essence, this means that decision-making for patient care involves the integration of three factors; the experience, concerns and preferences of the patient, the doctor, and the research evidence. To focus only on the research evidence is to ignore the patient and the doctor, the very people who are involved in the real world of suffering and its relief. Thankfully there is now greater emphasis being put back on patient outcome studies which, if this continues, will help to redress the balance.

the patient and the doctor, as well as the research
evidence

What about the evidence checks and reviews against homeopathy?

A handful of documents are often cited as evidence that there is no benefit to homeopathic treatment. However, the processes and methodologies used for these papers have been exposed for being flawed, unscientific and biased.

In March 2015, the Australian National Health and Medical Research Council (NHMRC) published an information paper on homeopathy, commonly referred to as “The Australian Report”.16 This report initially concluded that “there are no health conditions for which there is reliable evidence that homeopathy is effective.” However, an extensive investigation into this report revealed evidence of serious procedural and scientific misconduct,17 including the fact that the published report was NHMRC’s second attempt - a first report written in 2012 was never disclosed to the public.

In August 2019, after a long campaign by stakeholders and the general public, NHMRC finally released the first report18 in which the author had concluded that “there is encouraging evidence for the effectiveness of homeopathy”. A few days later, the CEO of NHMRC, Professor Anne Kelso stated that “contrary to some claims, the review did not conclude that homeopathy was ineffective”.19

For more information on the Australian report, click here.

In 2017, The European Academies’ Scientific Advisory Council (EASAC) published a position statement entitled ‘Homeopathic Products and Practices’.20 Despite appearances, this paper lacks scientific rigour, is based on highly selective citations and inaccurately presents the evidence base for homeopathy, thus failing in its primary remit to accurately inform consumers and EU policy makers about the evidence for homeopathy.

The paper’s opening paragraph exposes its lack of objectivity as it states its intention to ‘reinforce criticism of the health and scientific claims made for homeopathic products’. And when questioned over concerns of bias in April 2018, the EASAC President, Prof. Thierry Courvoisier said “It was never our intention to write a balanced statement …’

For more information about the EASAC statement, click here

The 2010 Parliamentary Evidence Check21 was produced by a small group of MPs to present the findings of their ‘evidence check’. It is not a scientific document and should not be used or viewed as such. No systematic scientific method was applied, it was not carried out by experts in the field and the choice of evidence allowed into the consultation showed a notable bias. Such fundamental flaws have been widely acknowledged and 70 MPs expressed their concern about the entire process by signing an Early Day Motion (EDM908).22

In addition, an independent critique by Earl Baldwin of Bewdley concluded that the report was, “an unreliable source of evidence about homeopathy.”22 Neither the Government nor the Department of Health acted on the recommendations of this report.

For more information on the Parliamentary Evidence Check, click here

The 2005 Lancet Review,23 ‘Are the clinical effects of homoeopathy placebo effects?’ written by Shang et al., purportedly matches 110 homeopathy trials with 110 allopathic trials. Yet the study clearly demonstrates selection bias,24 only 8 out of 110 homeopathy trials were selected for final analysis and none of these involved individualised homeopathic treatment – the form of homeopathy considered to be ‘usual care’. The authors ‘cherry picked’ the resulting data, in order to present a predetermined outcome. If they had used the 110 homeopathy trials, or if they had changed just one of the eight selected trials it would have shown a positive result.

For more information on the Lancet Review, click here

Why don’t we see more research into homeopathy?

Medical research is a costly and involved undertaking that is generally funded by large pharmaceutical companies, charities, trusts and governments. Millions of pounds are involved in drug development, which is usually recouped through licensing the drugs. As homeopathic medicines are derived from natural sources, they cannot be patented. Without the financial returns that patents help to provide, it is more difficult to find companies willing to invest in homeopathic research.

The homeopathic profession encourages more research into homeopathy and in an effort to address the gap, the Homeopathic Research Institute (HRI) was founded in 2009 by Cambridge-trained Dr Alexander Tournier PhD. HRI is an innovative international charity committed to high quality research in homeopathy both in the UK and overseas.

Homeopathy has the potential to be a safe, effective and inexpensive complement to conventional health care. In November 2019 the Bavarian state government announced plans to fund research into the role of homeopathy to reduce the use of antibiotics. This comes in response to the World Health Organisation identifying antibiotic resistance as a serious global threat and urging governments to come up with alternative strategies. In German hospitals alone, around 35,000 people a year are thought to contract infections due to multi-drug resistant bacteria and around 1,500 people die each year.25

More funding is required to find definitive answers needed by both patients and healthcare providers.

What is the best source of evidence and research into homeopathy?

The Homeopathy Research Institute (HRI) is an international charity dedicated to evaluating homeopathy using the most rigorous scientific methods available.

In collaboration with the Carstens Foundation, the HRI website provides a clinical research database that contains over 1200 studies, from randomised controlled trials to observational studies. It is the most comprehensive and academically rigorous database of its kind in the world.

HRI holds bi-annual international conferences dedicated to research in homeopathy. In June 2019, celebrating its tenth anniversary, more than 350 people attended the fourth HRI conference in London where 75 researchers and medics presented the very latest findings in the field of homeopathy from 27 different countries.26

Find out about Homeopathy Awareness Week

A clinical research database
that contains over 1015 studies